When compared to this time last year, when inflation was only 2.1 percent, inflation has significantly increased during 2022, rising by 2.0 percent between March and May. As a result, inflation has now reached 9.0 percent.

Inflation is a problem that continues to plague the United Kingdom and the rest of the world. There are several possible explanations for why inflation is currently so high.

This level of inflation can be attributed largely to Covid-19, as businesses are still reeling from the effects of the pandemic, with many failing to adjust to the new demands placed on them due to difficulties in acquiring the necessary products and materials to run their business.

Covid-19 also had a lasting impact on inflation  because the pandemic created a dynamic in which there are more job vacancies than there are people to fill them, which means jobs have had to offer higher wages to attract job applicants, which has had an effect on businesses by forcing them to raise prices.

More recently, the Russian invasion of Ukraine has caused an increase in the price of energy and agricultural commodities such as grains, which are required for food production.

What Does It Mean For You?

So what does inflation mean for you?  A higher rate of inflation translates into a higher cost of living, which in turn means that you can buy less of the same things with the same amount of money than you could previously.

In particular higher food and fuel prices can affect households, if your salary does not keep up with the rate of inflation then it would place you and your household in a disadvantageous position.

Another way that inflation may affect you is by deflating the value of your savings. For instance, if you open a bank account with no interest and deposit £100 into it, inflation will eventually lower the real value of the £100.

Even though you would still have £100 after 20 years, its value would have decreased to the point where you could buy much less with it, despite the fact that the amount of money itself would not have changed.

The graph below illustrates how the value of a £100 cash savings can be impacted by inflation and depreciated. Nevertheless, there are ways to combat inflation and take control of your financial future. 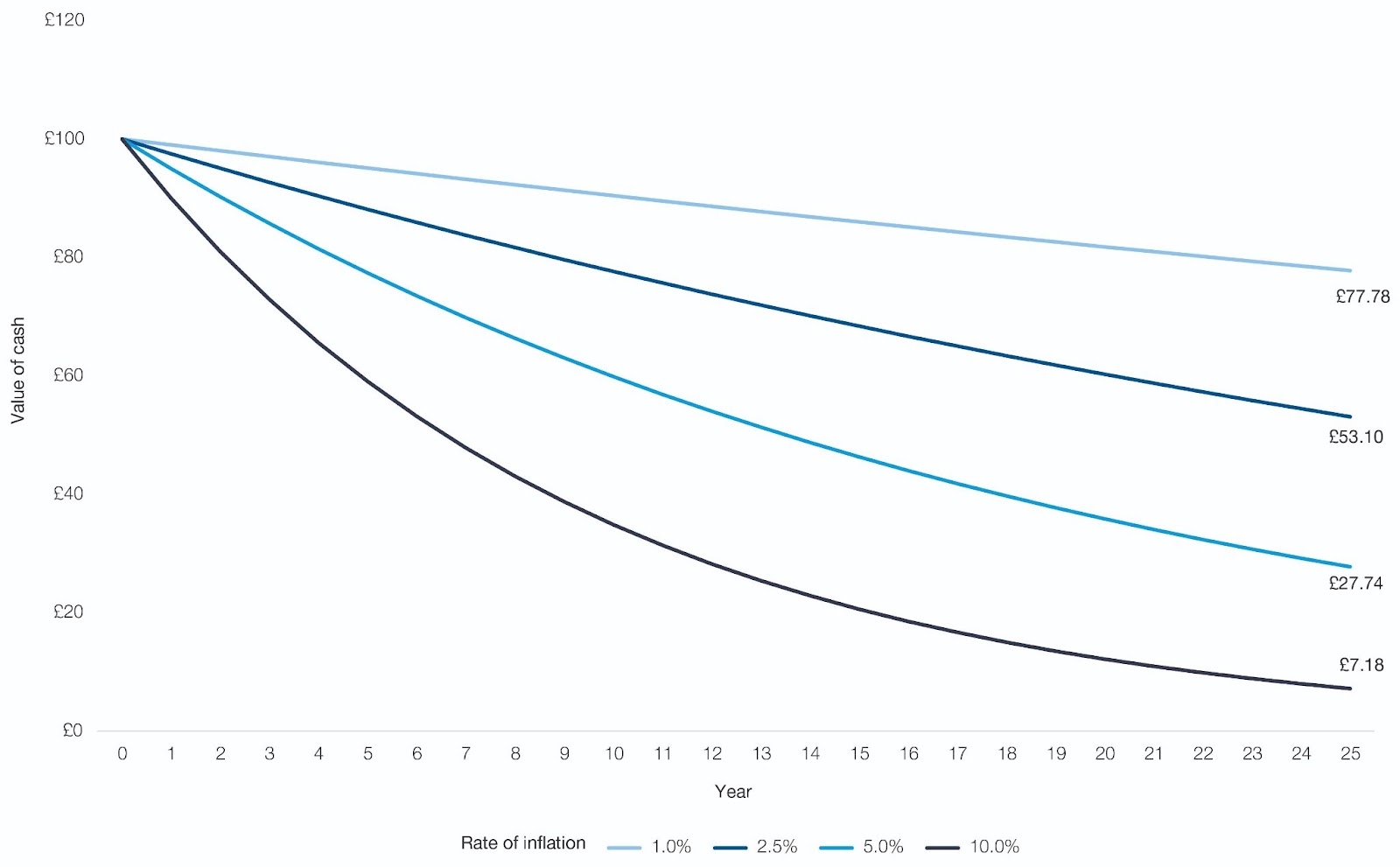 Source: Brewin Dolphin. Impact of four hypothetical rates of inflation on £100 of cash over 25 years. For illustrative purposes only.

What Is An Inflation Hedge?

Stocks, cryptocurrencies, and precious metals are some examples of assets that can be invested in as inflation hedges because they are expected to maintain or increase in value over time.

Why Do I Need To Hedge Against Inflation?

With the rising inflation rates having a firm hold on the global economy, inflation hedging is designed to protect the value of an investment and counteract the effects of inflation on currency.

When inflation is taken into account, certain investments that initially appear to offer a respectable return may end up being sold at a loss. For instance, if you invest in a stock that offers a 6 percent return but the inflation rate is 7 percent, you will lose 1 percent.

In times of uncertainty and financial instability, buyers are particularly interested in assets that are considered inflation hedges.

As the value of the pound, the dollar, and all other currencies declines, regardless of whether the actual amount of money you hold changes, it is almost a necessity to protect against rising rates of inflation during periods of financial instability and rising prices.

Buying investments as a hedge is intended to shield you from the declining value of the currency and to improve your financial situation.

Why Is Gold A Good Inflation Hedge?

Precious metals historically have been considered as a hedge against inflation, at the forefront of this Gold.

If you had buried both items then and unearthed them today, $35 would still only amount to $35 but 1 ounce of Gold would amount to around $1675. The difference is staggering. However, it must be noted that past results do not guarantee future results.

When you consider the alternative prospect, you now need an increased amount of fiat currencies in order to purchase the same amount of Gold.

In stark contrast to the value of Gold, which only seems to maintain and increase in its value, the value of the fiat currency has severely depreciated over time, with the purchasing power languishing and decreasing as time goes on. For this reason, Gold is regarded as an effective inflation hedge.

The Value of Gold over the last 10 years Source: Chards.co.uk

The value of the purchasing power provided by fiat currency has drastically declined as a result of the major economies of the world still suffering from social problems like Covid and international conflicts. When compared to the value of Gold, which maintains and can increase in value even through times of social and economic uncertainty, this is to the detriment of the average person, who will more than likely experience an increase in wage or salary but will also be faced with increased rates and prices due to inflation and be expected to handle it. 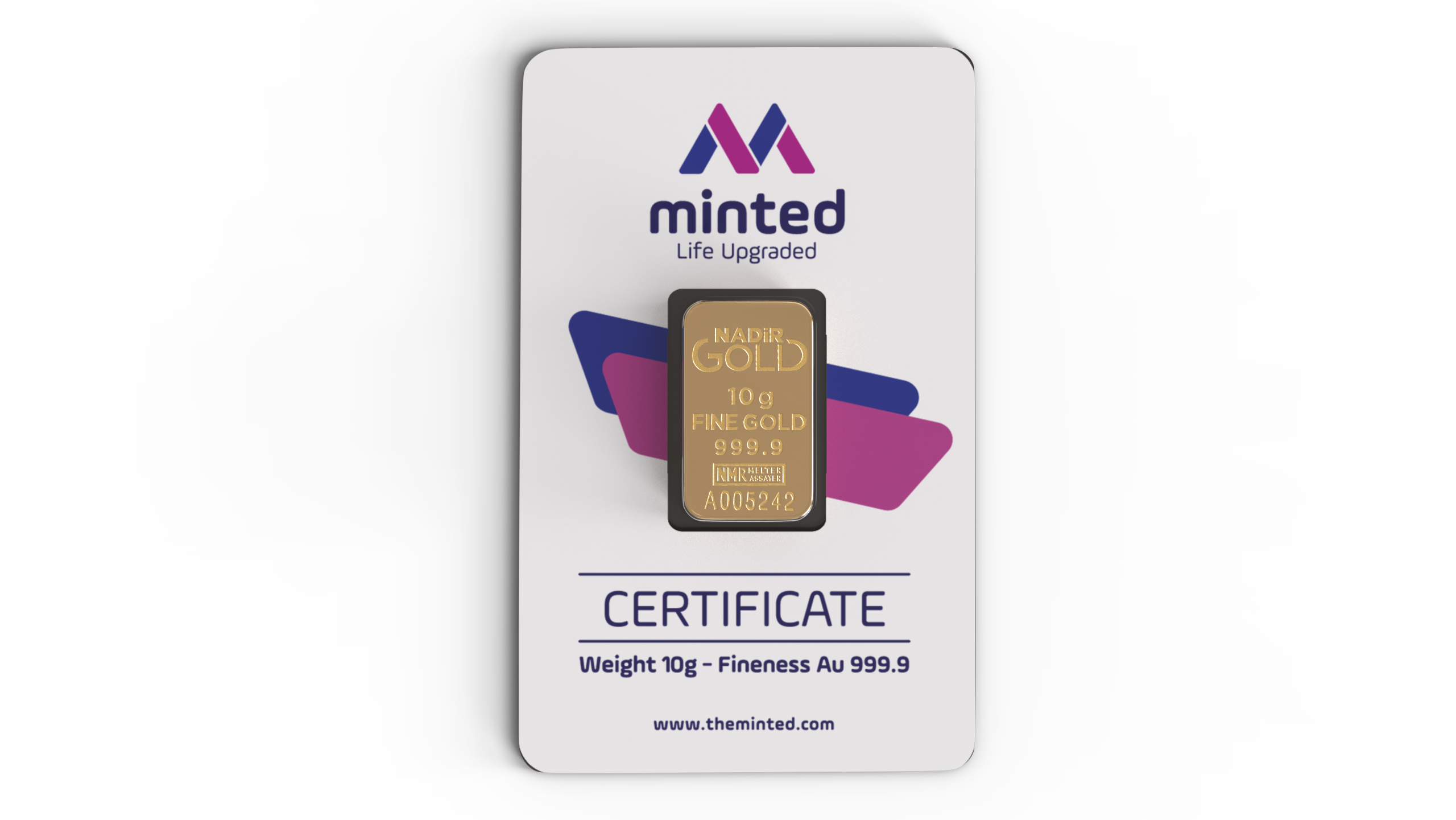